The QCT Miami Daily City Toursm provides a unique and fresh take on the area's history from the experiences of a native-born Miamian. This tour promises to take you places and introduce you to people previously overlooked on other tours like Moore Park in Miami (segment one), the former home of Pablo Escobar in North Beach (segment two), Miami Beach High School and Mayor Gelber (segment three), and the former Miami Vice hit TV show (segment four), to name a few . The new tour is developed by Mr. Juan D. "Jay" Whipple, a Miami native, who left the area for military service in 1978 upon graduating from Miami Beach High School.

Whipple returned here in late 2014 for a five month stay; his longest stint since graduating. "I was completely blown away and a bit intimidated at how much had changed since the late 1970's when I freely navigated Miami via automobile, my bicycle, the Jitney, city bus, and on foot," says Whipple. "Fast forward nearly four decades and I found myself literally driving in circles trying to get from here to there," he said.

Whipple took on odd jobs through temp agencies which allowed him to begin the long and arduous process of re-learning the city of his birth. He recalls working in formerly very familiar areas such as Miami Beach, Coconut Grove, Key Biscayne, and even an assignment in Miami Gardens (formerly Carol City) at the then Sun Life Stadium (now Hard Rock).

"The Sun Life Stadium assignment brought things full circle for me in that I worked at the old Orange Bowl Stadium in Little Havana while in high school in the late 1970's and actually got a chance to see up close and personal the entire Dolphin roster; including legendary coach Don Shula - at each home game," recalls Whipple.

Whipple then landed a job with an airport shuttle company located just a few blocks from his mother's home in the Gladeview Community near the MLK Metrorail station. "It was a blessing and a challenge," he stated because "I was now being paid to drive around in circles trying to get from here to there." That job helped him expand his navigational reach from Florida City to the south and as far north as Lake Worth.

"That job also gave me a chance to interact with both visitors', newcomers', and local residences' from all walks of life," he said. "After a while I also began giving them brief tours while in route to their destinations." Whipple decided to leave that job because the 50-plus hours per week did not give him enough time to begin the long process of developing this tour.

The 58 year old Miami native then signed on with two new ride share companies who were in the early stage of changing the paradigm of transportation services in the U.S. and abroad. "Signing on with those app-based start-ups gave me the freedom to set my own schedule which allowed me to pursue my tour development while still earning an income, interacting with visitors', newcomers', and locals', and expanding my navigational reach to Naples to the west and Jupiter to the north," he recalls. "I worked some very high places like The Breakers in Palm Beach, and some very low places where I actually witnessed some illicit activities going down in the wee hours of the morning." All and all he has literally traveled nearly 52,000 miles and logged in over 2,184 hours during a course of 16 months over a three-year period in preparation for this and other South Florida tours.

Whipple is no stranger to detailed tour development preparation as he was first to produce a driving Black/African-American Heritage Tour™of Charlotte, NC, back in 1992 after conducting over 127 hours of in-person research at the main library. "Back then the Internet was still in its early stages of development and did not contain nearly as much information as it does today," he points out. "Today most businesses, organizations (including our government), and even churches have made research a lot easier by providing their history on their websites."

Whipple's new contractual transportation jobs also gave him the freedom to pursue additional educational credits in history by completing a six week course on Miami history at Miami Dade Community College's north campus off N.W. 27th Avenue. "I remember going there shortly after it was built in the late 1960's for a gymnastics class, and later in high school to participate in track meets for Beach High and the AAU (Amateur Athletic Union), as well as practice on my own," he recalls; "Back then I could actually run from the bottom to the top of those stairs from one end of the stadium to the other."

He was also able to squeeze in some time, between contract ride share shifts, to complete the Miami In Me customer service program sponsored by the Miami CVB, as well as tag along as a tourist on a South Beach walking tour, two double-decker bus tours, a celebrity boat tour around the islands of Biscayne Bay, and a walking tour of Little Havana conducted by history guru Dr. Paul George. Oh, by the way, he is also a travel writer for Trend Magazine Online™. Finally, he was able to spend time conducting research at the Main Public Library Downtown which is one of his favorite places in the Magic City.

In December of 2014 Whipple gave his first Miami tour which was a walking city tour that began and ended at Bayside in Downtown. He invited some of his family members because they are sometimes the toughest critics. "They seemed to enjoy themselves but I realized that I had a lot more to learn to make the tour more interesting to locals," he said.

Just over three years later and Whipple is ready to begin offering his tours to the general public here in Miami. "I am currently in the process of hiring and training local guides who possess the qualities needed to educate as well as entertain our guests in a manner that exceeds their expectations," he explains. "I have been doing it for over 25 years and am confident that those that make the grade will continue to 'edutain 'tourists', newcomers', and locals' here in the Magic City."

Whipple's company - Queen City Tourssm and Travel - is celebrating 25 years of successful service in the travel and tourism industry in North and South Carolina, and have maintained an A to A+ rating with the Better Business Bureau over the past decade or so. They now offer free samplings of their QCT Miami Daily City Toursm and QCT Miami Daily Black Heritage Toursm. Future plans include utilizing these tours as fund-raisers for local historic landmarks like the Dorsey home in the Overtown neighborhood. Whipple has also recently published his third book entitled Black Charlotte From A Tour Guide's Perspective Part 1in which he has plans to enjoin with his two other titles - Charlotte From A Tour Guide's Perspective, and More Charlotte From A Tour Guide's Perspective - to become his first novel. 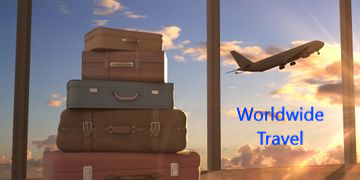