The next week after my move in for an Extended Stay the nosey (just like the reviews stated from Part I) Onsite Manager from Hell was at it again. It was around noon that next Tuesday when I received a knock on my door. It was her and one of the housekeepers wanting to clean my room a week earlier than what she stated during our initial in-person meeting just four days earlier. I reminded her of this and explained that I was still in the process of moving in for my six-month stay. She then asked me several times if I was sure that I did not need room service -- which was quite annoying -- so I asked for two trash bags just to get rid of them so that I could continue unpacking.

That very next day, Wednesday, around 12:15 pm, there was yet another knock on my door, and it was the nosey Onsite Manager from Hell once again. This time she asked me to move my vehicle which was parked out of the way and in the last designated space at the entrance to the property. I did and she then questioned why I did not park in the space that she dictated next to several utility trucks (high vehicle damage area) and hidden from my room's front window where I could see it. I had to explain to her again that I was not comfortable parking where she dictated, and I once again reviewed the property rules to see if parking was designated (it was not).

That next Monday at 10:06 am, the manager left a message on my work number regarding clutter in my room. I also provide contract transportation services and am not able to speak to anyone, other than customers, when on the job. I returned to my room later that evening and while relaxing and unwinding from a nearly 12-hour day of driving, there was yet another knock at my door at around 6:45 pm. It was her again; this time complaining about my personal and business items that I was still in the process of sorting through to decide what to keep in my room; put back into storage or discard. She then began to elaborate on the issue although I let her know that I was watching my favorite game show and that I was planning on discussing the matter with her that Thursday when I came in to pay my weekly rent. She then stated that she was going to put me on a trial basis until I got rid of my personal and business items from my room. I considered that statement very rude and unprofessional; just like the reviews stated. I later discovered that my neighbor in the adjacent room was allowed to keep far more items in his room including bookshelves, a weight bench, and treading machine. They did their best to hide that fact from me by keeping his door closed during weekly cleanings, but I managed to snap a quick picture on one occasion. A clear double standard that was so easily uncovered.

Later that week, after the Manager from Hell's maintenance inspection, I noticed that my small container of dishwashing liquid, 3 spare bottle caps, the two coffee bags, two brown pillow cases, and white toaster (supplied by them) were missing; my large white cutting board, toaster, mini plastic basketball goal, and coffee maker (supplied by them) were moved; and my wet/damp towel, wash cloth, and face cloth were sealed in a plastic bag on the floor causing them to have a foul odor when opened. I travel quite a bit, have stayed in an Extended Stay for 1 1/2 years, and as mentioned before am a travel writer for this magazine, and have rarely had an issue with room service moving or removing my personal or business items.

To add insult to injury I personally witnessed multiple guests moving in and out of the three Studio Rooms at the end of the property and this one gentleman in particular, who drove a midsize maroon Chevrolet, was allowed to rent one of them at will on at least a dozen occasions during my stay and in some instances for only two nights. All of this after I stated in writing, before moving in, that I expected to be moved into a Studio Room as soon as one became available. It was my condition for accepting the larger Standard Room initially and accepted by management upon them processing my first payment. After several request to the On-Site Manager from Hell it was clear to me that she had no intention of renting me the less expensive room per my repeated request. In fact, she eventually stated that the owner was not going to allow me to rent one of the Studio Rooms after collecting months of higher payments.

Then came the issue of their peculiar housekeeper (Elly May Clampett) who seemed to be one sandwich short of a picnic. She knocked on my door on the wrong cleaning day, which occurred on a few more occasions; disturbing my quiet enjoyment. They had a MANDATORY HOUSEKEEPING policy but later would complain about having to pay for housekeeping. Duhhhhhh! I have never stayed at a property that did not have a Do Not Disturb sign for the personal accommodation of guests who do not wish to be bothered. More about poor housekeeping in Part III. Then there is the weirdo owner (Jed Clampett) who strolls around the property as the maintenance man and delivery guy that routinely parks illegally in the handicapped parking space every Tuesday; in violation of North Carolina General Statues 20-37.6(e)(1), (2) or (3) and carries a fine of up to $250 per infraction. This Neanderthal actually yelled at me one morning because I was late cleaning my room before Elly Mae arrived. She could not figure out how to clean around a step stool and my desktop computer and accessories intimidated her. So, the Manager from Hell (Granny) decided that that was now my responsibility as a guest.

Their payment system was extremely inconvenient as I was told that I had to show up in person in their office which was not open on a regular schedule. I showed up on many occasions to pay only to find a note that stated that the manager was on duty, but I had to go look for them. Huh! This was so frustrating especially when I was in a hurry to go to work and did not have the time to go looking for someone who may or may not have been on their small property. I recall having to rush back to the property one Thursday evening to make payment to avoid the $10 late fee only for the Manager from Hell (Granny) to tell me that I was too late. It was 6:40 PM and they closed at 7. She then stated that I would need to come back first thing Friday morning and when I inquired about the late fee, she said that she would waive it. She later disclosed to me that other Extended Stay guests were allowed to pay a day late, including my neighbor, without additional fees. More favoritism! Most reputable properties have switched to an online payment system that makes it more convenient for their guests while eliminating that task for front office workers freeing them up to have more time to take better care of their most important assets -- guests. Granny later disclosed to me that the in-person requirement was her call because she gets bonus points whenever a guest swipes their card. How selfish and unprofessional! They later claimed that they were doing me a favor by allowing me to pay a day late. Just trifling!

They had these tent cards for their Rewards Program nestled among a myriad of other brochures and discount posters and fliers from area merchants in their front office. Granny never mentioned them to me personally, but I overheard her explaining the program to a potential guest over the telephone. She then offered the program to me months after I had been paying the regular weekly rates for their more expensive Standard Room as opposed to their Studio Rooms which were $50 a week ($2,600 per year) less. They would later claim that it was my responsibility to request the program. 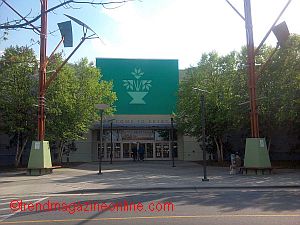